The power of 360˚ Photography in Travel Digital Marketing

360˚ photography has slowly crept out of the realms of science fiction into reality in recent years. This journey has been enabled by innovative devices that can turn any smartphone into a virtual reality headset, to transport consumers to a completely new experience.

But is it relevant for travel marketers? Yes! Travel marketers have a unique opportunity to use 360˚ photography to showcase their fantastic destinations and experiences like never before, to give travelers the sensation of being there without setting foot outside their house.

The technology is already out there:

The technology to enable 360˚ photography (and video) already exists. Facebook supports 360˚ photography – users can look around by moving their smartphone around to change the line of sight. It's available in Instant Articles and live streaming.

The hardware needed to create the content is readily available, too. Brands including Nokia and GoPro have invested in producing 360-degree cameras to enable you to take advantage of this new medium. The only limit is your creativity!

A chance to stand out from the crowd:

You might hear some industry experts warning you away from 360˚ photography. It's true, that compared to some channels it's still in its infancy, and not every consumer is set up with the hardware they need to experience it.

While for some this is seen as a negative, for the Trailblazers this will be a massive positive. It's a chance to set yourself apart to consumers against an industry saturated with copycat content. By delving into something new you create the opportunity to be memorable, so when the time comes to make a booking it's your site that sticks in the mind.

For some consumers, actually visualizing a destination is tricky. They can look at a nice photograph but that only gives a window of what it's actually like. 360˚ photographs are perfect for advertising the true beauty of panoramas, the internal artistry of historic buildings and even the full elegance of a hotel room. It gives you the chance to present a far more immersive experience than traditional photos can.

Just like approaching any new channel, you need to ensure that what you create adds value for your user. Does a 360˚ photograph give your user a better idea of your destination or service? If not then it might not be right for you.

Keep them on your site and away from competitors:

We know that on-site engagement is important in SEO – the less time a user spends on your website indicates to Google they didn't find anything of value. Travel SEO expert Ad-Rank can attest to this. It helped its client Holiday Hypermarket recover from a site migration with engaging content improvements and additions to increase revenue from organic search by 116.47%.

360˚ photography can be your ticket to more time on site, keeping users entertained for between five and 10 times longer than sites without it. As well as being beneficial to SEO, more time spent on your site means less time with your competitors, which can only be a good thing.

We've already suggested how valuable 360˚ photography could be, but is there any evidence? Search behemoth Google was one of the front-runners of 360 photography, adding virtual tours of popular landmarks, then businesses and art galleries to Google Maps. They commissioned an independent research company to measure the impact of these and found that business listings with a virtual tour were twice as likely to generate interest online.

On average, 41% of these destination searches lead to an in-person visit, measured by looking at bookings. There was an appetite for more, too – 67% of people who used this medium wanted more companies to use this in their marketing material.

Once you've dipped your toe in immersive technology, the next step is to go the whole hog and create 360˚ video. As mentioned above, the libraries already exist for this content on sites like Facebook, Vimeo, and YouTube, and much of it is user-generated – a telling sign that the interest already exists. A 360˚ video can give your users an even more compelling experience than mere images.

While some people are hesitating about using this new technology, others are already taking advantage. Etihad Airways has produced a five-minute film called Reimagine to showcase the luxurious A380 Airbus. Peter Baumgartner, the airline's former chief executive, said: 'The film demonstrates how, as an innovative brand, we continue to break down the barriers of convention and lead the way in intelligent communication and best practice, not just in the aviation industry, but in marketing, communication, and technology.'

It's your choice whether you want to give your users the same quality of experience or risk being left behind. All The 2022 Photography Slangs You Should Be Aware Off 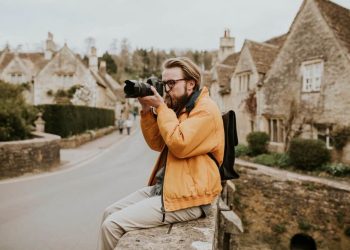 How To Start Your Career In Photography?